An already busy winter can only get busier with many high impact and star players still available on the market. The Mets, Braves, and Yankees have seemed to be busy early, but many contenders like the Astros, Dodgers, Rockies, Cubs, and Brewers have been quiet. Let’s see where teams stand with the top 15 free agents still available.

Robertson is negotiating with teams without an agent, but he should still get a good payday. This one is tough to predict with the Red Sox and Mets being linked to him recently. The Mets got Familia though, so I am going to lean with the Red Sox who I think will save their money by not going after Craig Kimbrel.

Murphy should be heading to an America League team, but I think the Rockies might be interested in his versatility with a potential opening in the outfield and at second base. The Astros are looking to keep up with the AL East powerhouses, and I think he could be a good DH and fill in at first for Gurriel against tough righties.

Rumors are floating around that the A’s are looking to move on from Lowrie, but they could still use him. The Brewers are a little weak/young up the middle though, and he could bring some good stability and experience to either second or shortstop. Yankees could very well be in on this if Lowrie is okay with just a one year deal.

The Moose is loose again in 2018-2019 as he is probably struggling to find a long-term contract again this winter. The Angels have a hole at second or third with Cozart being able to play either, and Moustakas could play either/or, too. The Brewers haven’t given up on him yet, although Jed Lowrie seems like a better fit. My sleeper pick out of all of these guys might be Moose to the D-Backs. The D-Backs still have a question mark at first without Paul Goldschmidt, and this would allow for Diamondbacks to really pick and choose who they want to play the corner infield positions with Lamb, Escobar, and potentially Moustakas.

This one I see as a toss-up because all five of these teams really need back-end relievers. The Phillies and Cardinals seem to lead the way in rumors, but I think the Astros are a perfect fit because they don’t have a go-to left-hander in their ‘pen. The Astros wanted him at the trade deadline so we will see soon where he ends up as I expect him to sign first out of this bunch of relievers.

DJ Lemahieu is a great all-around player, but there are just a ton of second base options on the market. The Nationals have the biggest hole at second, but the Brewers are a close second. I think the Brewers will want someone who can play short and second, so I will lean towards the Nationals here. The Dodgers could be a sneaky fit here as second base has been a revolving door for quite a while in L.A.

Phillies seems high on Miller, but this could go many different ways as well. The Phillies really need a veteran at the end of the bullpen with closer experience with Seranthony Dominguez being only 24.

Almost every team could use and want Marwin Gonzalez, but I think the Rockies will pull ahead in this race with CarGo, Gerardo Parra, and Lemahieu all gone. The Yankees seem interested, and the Indians could make sense too with outfield help needed.

The Astros hadn’t done much until Michael Brantley signed for two years, but they did get Robinson Chirinos before. He isn’t the answer though with Brian McCann leaving. Grandal could even DH a little in Houston, but the Rockies and Angels might make a run at him. The Dodgers should still be interested too with just Austin Barnes and Kyle Farmer as the catching options. JT Realmuto is probably a higher cost than Grandal at this point.

Red Sox need to get aggressive with their bullpen if they aren’t willing to pay Kimbrel the big bucks, and this should be a great plan B. Expect them to add an elite arm or two as I was leaning towards Robertson going to Boston as well. Ottavino is from New York City, so it will be interesting to see how that plays out.

I’m assuming the Mariners are ready to move on from Nelly because they have moved on with just about everyone, so I think the Twins might make a splash. They added Jonathan Schoop and another big bat could make them a threat again to the Indians. The Rays shouldn’t be too comfortable with Ji Man Choi/Yandy Diaz as the first base/DH combo too. I thought the Astros would be big on Cruz, but Brantley might have slowed that discussion a bit.

The Mets have been connected to Pollock for a while now, but they signed Rajai Davis to a minor league contract recently. That doesn’t mean too much to Pollock, but Cespedes will be coming back around the second half too and is under control until 2020. The Giants need outfielders bad, but are they going to spend right now at the bottom of the NL West? The time is now for A’s to pay someone in the outfield with two openings out there with Nick Martini, Ramon Laureano, and Dustin Fowler fighting for playing time. Oakland needs pitching as well, but at some point, the A’s got to spend a little bit, right?

Cardinals made a huge splash for Paul Goldschmidt, but now it’s time to hit the free agent market for relievers. They will get a big arm for the back end, and I think they might splurge and go all in on Kimbrel. The Red Sox might be out if Kimbrel wants to push the reliever contract record because the Cardinals, Phillies, and Braves should all be able to outbid the Sox.

It’s all about timing in sports, and Keuchel peaked at the wrong time, unlike fellow lefty Patrick Corbin. Keuchel should still get good money as many teams could use his services, although it looks like the Astros will use their money elsewhere. The Brewers need an ace while they are still in contention in the National League, but the White Sox, Padres, and Reds could all use a veteran for the future. The Angels could be a player too, but I don’t know if that is the right financial play for them. Brewers haven’t be rumored as much as the Padres, Reds, and White Sox, but I think it makes more sense to go to Milwaukee. 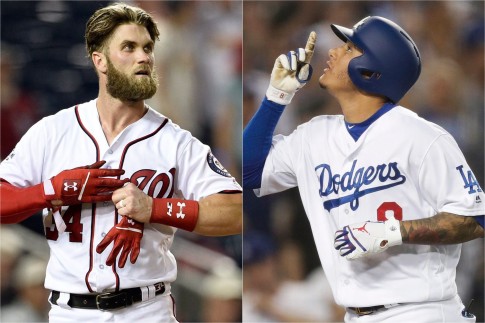 Yonder Alonso is now with the White Sox, and they need someone to lead the front out of a long rebuild. The Sox are meeting with him this week, and they seem like the best fit. They can play him at short and move Tim Anderson to third. The Phillies just got Jean Segura, and they got Franco, Hernandez, and Kingery in the infield as well. The Yankees are meeting with Machado this week too, but it seems like Manny wants to be a Yankee more than the Yankees do.

Not much buzz right now about Harper, and it is looking like Boras might make baseball fans wait a while for this signing. The Phillies need a star, and that would fill out the outfield real nice with McCutchen, Herrera, and Harper. The Braves need an outfielder, but can they afford him? The Dodgers and Cardinals could become favorites in the NL with Harper, but they both seem reluctant to give him the biggest contract in baseball history. Nationals and Giants seem like long shots, but they both would love to have him. The team is looking just as unpredictable as the contract length and amount at this point.

Photo from Dallas Keuchel Twitter and Louis Oprisa from medium.com

My name is Jake Lieberman, and I live in Phoenix. I am currently a senior attending Barrett, the Honors College at Arizona State University. I have been a baseball player and fan my whole life. I will be the editor and a writer focusing mainly on the Diamondbacks.

The Bullpen Free Agency: Ranking the Potential Landing Spots for the Best Remaining Free Agents
%d bloggers like this: